Read the full story on the SMH website which has been syndicated to various other Nine publications including The Age, The Sunday Age, The Sun-Herald, WA Today and Brisbane Times.

Here is an excerpt:

As the world turns on coal, scientists are at work on green steel

By Nick O'Malley, National Environment and Climate Editor for The Sydney Morning Herald and The Age

One Wednesday late in August a small shipment of steel was delivered by the Swedish industrial giant SSAB to truck maker Volvo AB.

The steel looked unremarkable, but was in fact the first delivery of steel manufactured without the use of metallurgical coal in history, the result of years of research and a collaboration of three Swedish enterprises. 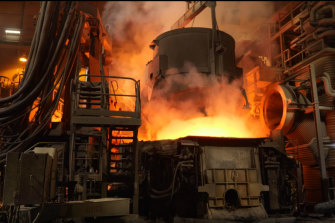 Green steel trials in a MolyCop furnace in Newcastle.

As world leaders prepare for the COP26 climate talks in Glasgow in November, momentum is building in a movement to have them agree to rapidly phase out the use of thermal coal, which is burnt in power stations to make electricity and is the single largest source of global greenhouse gasses.

No similar movement exists to drive out the use of metallurgical coal, because, until recently, steel production without it was inconceivable. But technological breakthroughs in steelmaking in Sweden and in Australia are changing that.

“There will be a time, soon, when we can make not just steel but all the metals we need without using coal,” Professor Veena Sahajwalla, director of the University of NSW’s Centre for Sustainable Materials Research and Technology, said.

Each tonne of steel produced creates about two tonnes of carbon dioxide. It is released in the creation of the energy used in the production process and as a gas from the coal as it is burnt in the furnace to provide both carbon and hydrogen crucial to the steel making process. 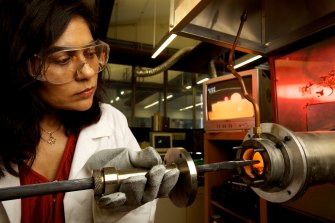 Professor Veena Sahajwalla, at a laboratory furnace at the UNSW SMaRT Centre.

At present steel making creates about 8 per cent of the carbon dioxide released into the atmosphere, making it as damaging to the climate as the world’s car fleet. Steel production is expected to triple by 2050, and current steel making processes would use up about half the budget of carbon dioxide we can still emit into the atmosphere before we cause 1.5 degrees of warming.

The Swedish consortium produces green steel by using a direct reduction reactor powered by renewable energy rather than a blast furnace, and replaces coking coal with hydrogen, which is created by splitting water with electrolysers. At present electrolysis is energy intensive, but it is expected to become more efficient.

Professor Sahajwalla believes that if we are to properly deal not only with global warming but with the broader damage we are doing to the environment we will need to learn to view what we now call waste as valuable resources, to be reused endlessly and repurposed rather than discarded.

A decarbonised economy will be almost entirely electrified, says Professor Sahajwalla, and most of the critical elements needed for the process – such as zinc, manganese and cobalt – are routinely thrown away.

“It drives me a little bit crazy to see an old remote control thrown away with batteries as if it is nothing,” she says.