Interview with The Guardian

In this feature article by The Guardian Australia, Veena talks about the waste crisis, solutions and how the innovative work at the UNSW SMaRT Centre can help society be more sustainable. Below is an excerpt and here is a link to the full story.

Veena Sahajwalla has a solution for the waste crisis. While for most people the ever-growing mountains of rubbish stockpiled around the world seems like an overwhelming problem, the materials scientist and engineer sees the crisis as an opportunity that could help us to rethink the way we make and dispose of everything in our lives.

Take textiles. Australians send around 88% of textiles to landfill, with around 6,000kg of clothing dumped every 10 minutes. Earlier this year, there was a nationwide clearing-out flurry, leading to charity shops being inundated with unwanted goods. Most were destined for landfill.

Sahajwalla is already on it. She and her team at University of New South Wales’s centre for sustainable materials research and technology (SMaRT) in Sydney have been working on a manufacturing process to create building materials from old textiles, paper and glass. These waste materials are stripped down to their basic elements, then reformed into floor tiles, ceiling tiles or sound-absorbing wall tiles. 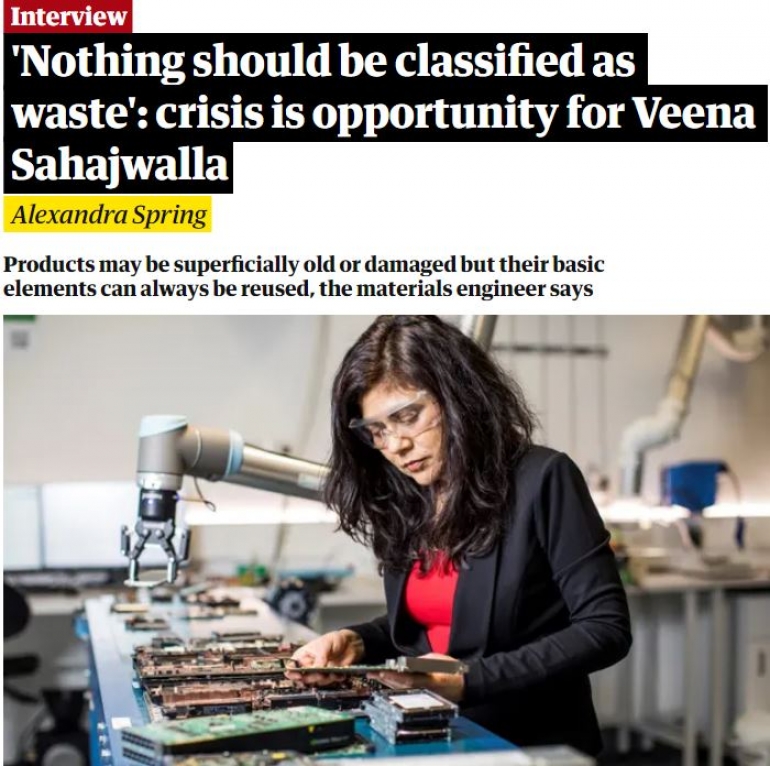 The idea of reforming waste is what drives her. She was first recognised for inventing “green steel”, a process in which old rubber tyres were melted down to be used to replace some of the coke in the production of steel. Millions of tyres were diverted from landfill and used by OneSteel, an Arrium company, now owned by Sanjeev Gupta’s Liberty House Group, to manufacture steel.

The way she sees it, while things get old or damaged at a superficial level, their basic elements still exist and can be reused to create new products. “All of these products will come to the natural end of their lives as the macro product but at the micro level, the basic elements – the fibres in garments or the actual elements that exist in plastics and tiles – they are still there. Your tyres [may be] worn down, that doesn’t mean the carbon has disappeared, and the hydrogen, it’s all in there, it’s part of the molecular structure.”

She adds: “Ultimately we want to get to the point where nothing should be classified as waste but [instead] it’s a product that’s reached the end of its life and ... it’s just waiting to be reformed into something else.”

One of her next projects was tackling e-waste and she applied the same thinking. Discarded laptops, smartphones and circuit boards were transformed into valuable metal alloys such as copper and tin by exposing them to heat, while the glass and plastic could be converted into materials used in industrial-grade ceramics and plastic filaments for 3D printing.

She also came up with another piece to the puzzle by inventing a way in which these processes could be done by small local businesses. Micro factories are single or a series of small machines that use technology to transform waste. They can be incorporated into just about any existing manufacturing businesses, from a car workshop to a local window frame maker, and they can be switched around to process different types of waste, depending on what is required or what waste products are available.

It’s the opposite of mass production, Sahajwalla explains, with things produced at a smaller scale and customised to what is needed. “The notion of reform is that you’ve got so much agility and flexibility, that you’re not producing the same thing all the time and you’ve got the ability to be able to change your supply chain any time you wish to.”

Her team has turned their minds to other waste materials, including glass. Glass is a huge waste problem in Australia: we consume about 1.36m tonnes of glass per year and in 2017, it was reported that hundreds of tonnes of waste glass were being stockpiled because it’s cheaper to import glass bottles than recycle them. And while it’s widely believed glass is easy to recycle, most common forms of glass create problems.

These are the limitations of traditional recycling, says Sahajwalla, because nothing is ever truly pure in real life. “A glass recycler will take your nice clean bottles and clean domestic cups – but don’t put in architectural glass, don’t put in coloured glass. Suddenly you start to see why glass recycling is not so simple.”

In reality, glass products are always made of mixed materials. “You will always have labels and the different colours, the jam jars will always have lids ... There is always going to be that level of cross contamination.”

In Sahjawalla’s more advanced recycling process, cross contamination is a virtue rather than a problem. Those walls, floors and ceiling tiles created by microfactories are a blend of different materials so having labels on the glass isn’t a concern. In fact the blends are what give the tiles their unique properties, with wood adding strength and textiles offering sound absorbency.

The tiles can also be truly smart too, with inbuilt electronic componentry for wireless charging, plug and play devices, sensors and smart lights. And because this is all about minimising waste, Sahajwalla says tiles can be replaced individually, rather than necessitating a complete overhaul whenever technology is updated or colour schemes changed.

Next on her list of problems to solve is that of food waste. In Australia, one in five shopping bags ends up in the bin each year, according to OzHarvest, and while some of it could be diverted to compost, there’s already an oversupply. Speaking at the recent Times Higher Education summit, Sahajwalla revealed that the team had worked with Planet Ark to create a tile made with a high proportion of old coffee grounds. And she promises that there’s more to come.

The thing that frustrates her most is the idea of burning or burying waste. “You are losing those elements forever by burning it. There are some things where by burning it, you are completely ruining the whole thing … You have taken everything backwards by putting it in an incinerator just in the quest to get rid of the waste.”

Instead, she says it would be better to deal with the reality of modern products and how they end up as waste. “We’re never going to go back,” she says “That is the product, this is life, now let’s be clever.”