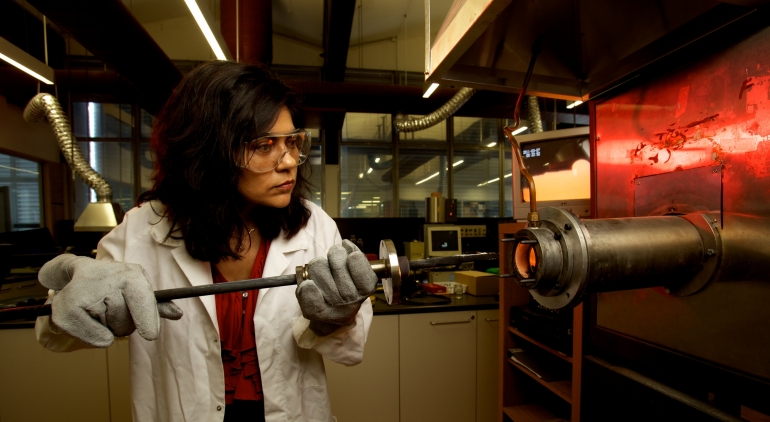 In this The Daily Mail news story, Professor Veena Sahajwalla, talks about her groundbreaking invention known as Green Steel and its new global opportunity, using the carbon and hydrogen in old car tyres to replace coking coal in steel production.

Read the full story online – below is an excerpt.

The heating up of old car tyres to make steel could one day spell the end of coal - threatening one of Australia's key exports to China.

'We are certainly looking at a future where the dependency on coal for steel making is completely eliminated.

'So the goal very much is to say that we want to get to zero coal and coke in the process of making steel.'

'It's basically asking the question: "Where will the tipping point be for many countries like China and others?",' Professor Sahajwalla said.

Most of the world's existing steel production involves heating coking coal in a blast furnace at 1,000C, but green steel technology is about phasing this out and replacing it with a new method of making liquid steel.

'A traditional blast furnace will always have coke not just from a heat point of view but coke also provides a structure - it is a solid product that sits inside a furnace,' Professor Sahajwalla said.

'The traditional coke that is used as a source in a furnace, we're talking about replacing that coke with, of course, waste tyres.

'The science shows that it works.'

Green steel production relies on this method to turn rubber tyres into metal.

Michael Parker, the company's president, said its manufacturing, combining coking coal and oil with crumbed tyre rubber and the use of renewable solar energy - to power an electric ark furnace - produced 80 per cent less carbon emissions than traditional steel making.

The green steel method, for now, has significantly reduced the need for coal in steel production but is has not completely eliminated it.

'This polymer injection technology allows us to substitute probably about half of that with crumbed rubber,' Mr Parker told Daily Mail Australia.

'Use the carbon and hydrogen out of waste tyres to replace virgin, raw materials.'

As part of the green steel production, tyres are put into a high-temperature electric ark furnace to extract hydrogen so iron oxide can be turned into iron as part of a chemical transformation.

'It's the rubber that contains all these other elements,' Professor Sahajwalla said.

'It's the tyres that give you these other molecules like hydrogen which then participates in the reaction and that's what allows us to convert the iron oxide into iron which is what becomes steel.'

The finished product sold to customers depends on added alloys and additives.

Though rubber tyres can replace the need for coking coal, a lot of the success of green steel will also rely on recycling existing scrap metal.

'There's not enough scrap steel in the world to replace the demand for new steel,' he said.