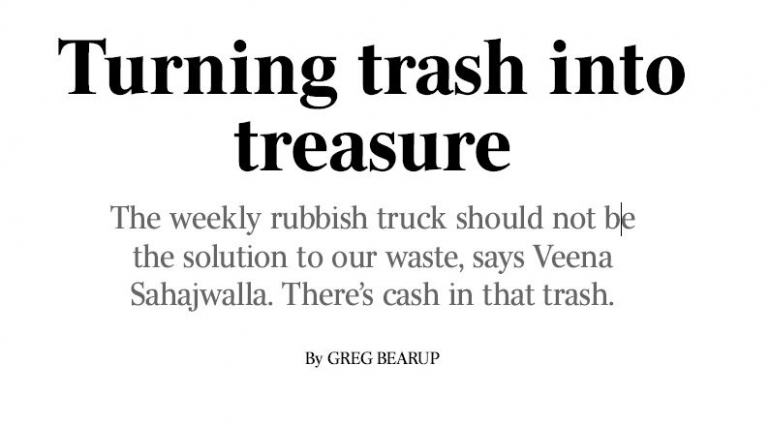 In this The Weekend Australian Magazine news story, Professor Veena Sahajwalla, talks about her groundbreaking invention known as Green Steel and its new global opportunity, using the carbon and hydrogen in old car tyres to replace coking coal in steel production.  She also reveals progress on her Microfactorie technologies.

Read the full story online (note this is a paid subscription site) – below is an excerpt.

Veena Sahajwalla, dressed in a hard-hat and a blazing safety coat, is bouncing with excitement in her steel-capped boots. She’s one of the world’s leading experts in the field of recycling science, the toast of academia, but it’s obvious there are few places she’d rather be than here,in the control room of an electric arc furnace at this Newcastle steel mill. She can’t wait to step through the door and onto the floor where a raging torrent of heat is rendering steel into liquid.

“Greg,” she says, leaning in to be heard above the cackle of the furnace. “It’ll make me sound like a pyromaniac [but] I love all this high-temperature stuff. Everything to do with big, hot furnaces.” She gives me a cheeky smile and a hint of Indian head wobble. “I love the whole hungry beast of a big metal furnace. It works for me.”Then, beaming with awe and wonder, she steps through the door to be greeted by the hot breath of the beast. 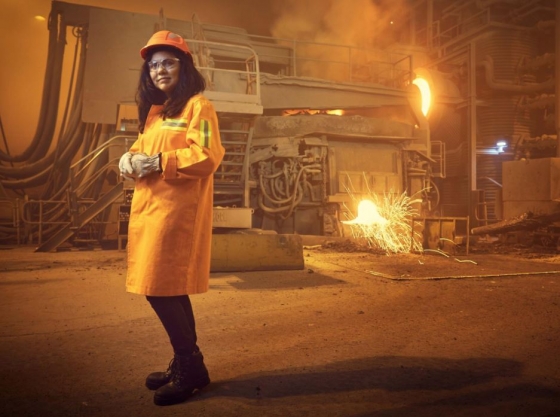 Sahajwalla is a world leader when it comes to this molecular alchemy. Australian steel makers have commercialised her groundbreaking invention known as Green Steel — using the carbon in old car tyres to replace coking coal in steel production.Her technology has been patented and exported around the world, used in the production of more than 30 million tonnes of steel. Last year she was made a fellow of the esteemed Australian Academy of Science.

Today, here in Newcastle, she is taking her technology one step further. This furnace is using coke to provide the vital carbon in the scrap steel recycling process,but trials are underway that will see it transition from coke to rubbish — shredded plastics that, like coke, are packed full of carbon. The plastics will be funnelled into the middle of this furnace at more than 1500 degrees where there’s no oxygen so it doesn’t burn. The carbon in this junk becomes a vital element in the steel.

For more than a century they’ve been making steel on this site at Maud St, Waratah, a suburb of Newcastle; they currently produce train wheels and axles and grinding balls used in mining. During World War II the mill made 200,000-odd artillery shells and other munitions. If your grandpa fought in the war, chances are he was capped with a steel helmet made by the blokes at the old Commonwealth Steel Company — more than two million were shipped out through the gates at Maud Street to Allied soldiers.

What may surprise many is that this steel mill still exists — didn’t we offshore all this already? It went through some lean years and several owners, and is now in the hands of a US company, Moly-Cop. And on the day we visit, there’s a sense of great optimism among the workers. They’ve witnessed the alchemy of trash being transformed into valuable products. They’ve seen the future and it is in breathing new life into old rubbish.

The Newcastle steel workers were dubious when Sahajwalla first suggested replacing coke with plastic but they’ve discovered it’s actually significantly more efficient and less toxic than the coke. Going green, they say, gives them a competitive advantage. They’ve taken on Sahajwalla’s ideas with gusto and recently began experimenting with a process that transforms old photocopiers and their endless toner cartridges into bespoke carbons that can be used in batteries.

And now, in partnership with Sahajwalla and her team at the University of NSW’s Sustainable Materials Research and Technology (SMaRT) centre, they are working on the Holy Grail, feeding their furnaces with car “flock”: the glass, leather or vinyl seats, plastics, tyres and e-waste that’s left over when the car has been stripped of its metals. Tens of thousands of tonnes of flock end up in landfill each year. Moly-Cop has begun trials, feeding it into its furnaces in a process called thermo-micronising to extract the valuable stuff.

Combinations of flock can produce an array of highly specialised materials including ceramics that can be used as computer circuitry and chips, as well ashighly valuable carbons and graphites. The steel works is also planning to invest ina solar plant to drive its hungry furnaces. And so while Canberra fiddles as its energy policy smoulders, this company is taking the future into its own hands.“We’ve got to stop creating energy by burning crap,” one of the metallurgists says.

Ian Tooze (below left), an engineer with Moly-Cop, tells me Sahajwalla has changed their thinking. “She’s brought the ideas and the science to the table and challenged us tothink: ‘Well, what could be?’” He reckons that within five years they’ll have a commercially viable thermal-micronising plant on the Newcastle site, processing thousands of tonnes of flock. It will be a game-changer for the mill. “Mate, if we can make this micronising plant work we’ll put more people on, our business will grow,we’ll get new revenue streams and we’ll become more competitive by using some of those products in our steel making process.” 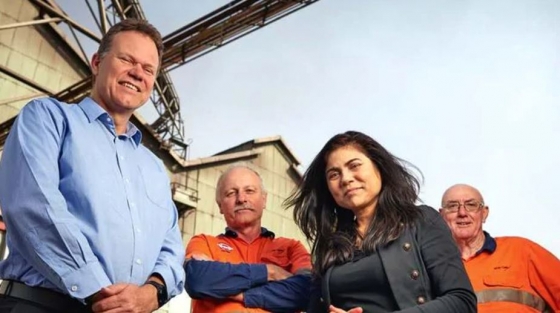 The possibilities for this 100-year-old mill, Tooze says, are now endless. “Why couldn’t you start a battery-making plant up here? Why couldn’t you start an electrode plant, because all the raw materials are here… I can see a world where we are creating all these regional jobs, feeding all this material back into the supply chain.”

Professor Sahajwalla’s got them thinking.

In 1947, when the British partitioned and abandoned India, Sahajwalla’s parents were swept up in the brutality. They were children from Hindu families living in what is now Pakistan’s Sindh province. The two families fled for their lives, leaving behind property and possessions as hundreds of thousands were slaughtered in pogroms on both sides of the British-drawn border. “My mother and her brother were only very little at the time,” Sahajwalla says. “There was absolute chaos and they were separated from their parents… the stories from that time, and things they witnessed, were just horrific.”

The author William Dalrymple says Partition is as central to modern Indian identity“as the Holocaust is to identity among Jews”. Sahajwalla says this was the case in her family and it drove them all to high achievement: “We grew up with a sense that we’d made it out alive and that we’d better not screw this up.”